This year the riskiest thing you can do is to take no risks. 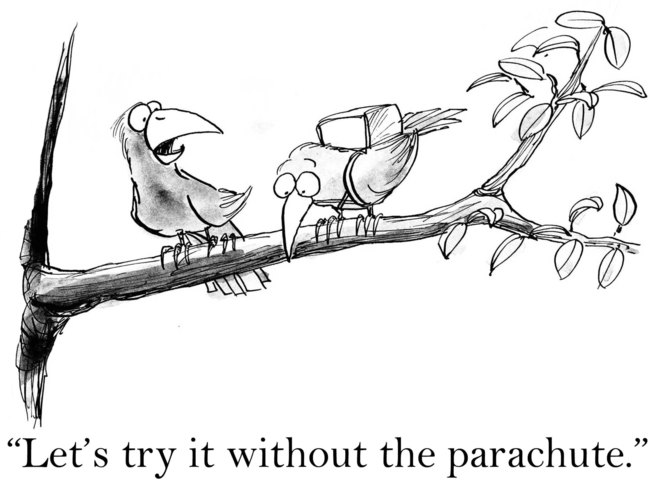 In 1984, a young Sri Lankan man in his early 30s reluctantly fled his home, leaving behind his newly wedded wife and his four-year-old son. Uprooted from all he knew and anxious of all that lied ahead, he arrived at the borders of the UK. This man is my father. The young woman left to care for their child, in a country imploding from civil war, with dreams of joining her husband for a better life - is my mother.

This is the beginning of most refugee stories with only the details of where, when and who changing as history repeats itself. It is this risk that my parents took that would change their generation and mine forever. No risk I have taken until now and no risk I can see myself taking in the foreseeable future has stakes as high as the decision my parents took - and this is probably true of most of you reading this. This raises the question as to whether we are making the most of the opportunity we’ve been given?

Most of us are living a life that could have been predicted for us on the day we were born. School at 5, university at 18, a job for life straight after that, followed by marriage, kids and then work till we get our pension. How many of us have milestones in our life that are different to those? Are we really making full use of free will and the opportunity we’ve been given if we’re living a life that could have been mapped out for us? Whether you’re an accountant or a solicitor, thanks to someone’s decision that it takes 8 hours a day to do every job in the world, your life has become just as predictable as a bad movie. We live our life firmly holding onto the railings even though we’ve never fallen. The longer we hold on, the more our imagination of the pain becomes worse than the actual pain of falling, so much so that we’re not willing to let go of the railing - not even for a moment to explore.

Migrant parents may have wanted their kids to become doctors and lawyers like they were the only careers that existed, but this is nothing but a manifestation of their need for security. You can’t blame them for seeking this security when they had so much taken away from them at such a young age and they spent many years trying to reunite with that feeling of stability in a new country. They had a reason for determinedly seeking security, but what is ours?

My parents took a risk when their worst case scenario was losing everything they had and years of their life - for most of us the worst case scenario is no where near as bad. Our parents want us to live a life they only aspired to, which is fair, but how that is done only we can decide. It is our responsibility to tell them that they have already given us that security and it is time for us to build upon this like they would have if they had been given the chance - instead we’re stuck at the same point of Maslow’s hierarchy of needs afraid to move up.

Sheltered and secure in our comfort zone, we’re becoming a generation soaked in apathy. Many from my parents’ generation were civically and politically more aware in their teens than some of my peers are in their thirties. We have a false sense of safety in doing the same thing over and over again and by not interacting with anything outside of our circle of comfort, but if there is one thing the world repeatedly teaches us, it is change is inevitable. The sooner we acknowledge it and appreciate it the more constructively we will respond when we are surprised. If we spend our life playing it safe, no one will ever know who we are. Even worse, we won’t get a chance to find out who we really are.

So this year take that risk. The shadow of uncertainty is inevitable, but it is also part of the beauty of life. You think you’ve been driving the train, but it is the guy who laid the track that set the path so it’s time to take a risk and be that guy. It’s incredible how easily people put off the things they really want to be doing. How many times have you heard your friends say I really want to do X but i’ll do it after doing Y for 5 years although I hate it? Not only are you taking those 5 years for granted but it shows a complete disregard for the value of your own time. Life is too short to be doing stuff that doesn’t matter. Whether you want to cut down your hours to spend time with your family, take a sabbatical to travel the world and write that book, try your hand at starting a business or just take time out to find out what you actually love doing, take that risk this year. At the very least, whether the risk pays off or not, your life will make a better movie.

The 5 Things Every Creative Should Know…

1. Know what you can do Do you know what you’re good at? Well if you do, it’s not enough to just know - you need to know how to exploit that skill to your advantage. It’s frustrating to meet an individual who is evidently talented and... Continue →