I Was Shot Last Week… 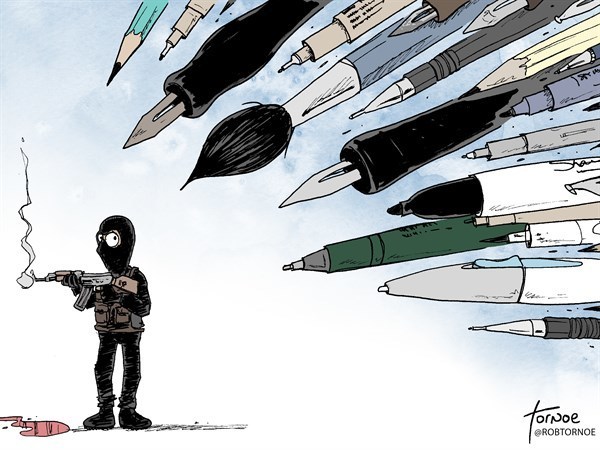 An attack on freedom of speech is an attack on you and I, whether we have the same opinion or not. The Charlie Hedbo shooting is not an isolated incident but history repeating itself and an everyday reality in parts of the world less reported.

The cold blooded murderers from the shooting, the vandals who are now smashing mosques in retaliation, Rupert Murdoch with his ignorant sweeping generalisations and the French state who banned the burka – they are all cut from the same cloth. The victim here is the basic human right to express and the attacker is intolerance.

The shooters are psychopathic criminals and they could have said they did it because Charlie Hebdo drew a satirical cartoon that offended blondes – if that was the case would it be fair to blame all blondes or even hair colour in general? Islam has just as much to do with this as the clothes a rape victim was wearing when they were attacked – NOTHING. The current narrative sensationalised by mainstream media is reductive and trivialises the situation by polarising society to find a hero and villain.

Bringing Islam into the discussion is only blinding us from bigger questions about a society that is collectively responsible for producing these killers. Why are people feeling disenfranchised from the society they live in? Why are we not able to protect the vulnerable who are being exploited and radicalised? What role does Western Governments’ involvement in foreign conflicts play in this? Why are we so intolerant as a society?

The cornerstone of every working democracy is the freedom of expression. It would not be possible for people to use the right to vote or contribute to the decision-making process in their society without the access to information and ideas, or the space to express their views freely. This incident is not just about a magazine or a cartoon - this is about upholding the values of a democracy.

Today it’s a cartoon; tomorrow it could be another book, play, song, film – you might even be told to remove your Facebook status. It’s happened before and it will happen again if we don’t protect not just our own right to express but also our neighbour’s right even if you don’t agree with them. If not, there will be a time when we won’t even be allowed to have an opinion. It’s a sad state of affairs that this is not a case of my imagination going wild, as we can sit here and name examples of countries where a small elitist group decide what people see, hear and feel.

I am not Charlie

This quick-to-shut-things-down approach by banning, censoring, burning and now killing are creating an environment where decisions are now more and more being made out of fear. The fear that particular interest groups will be offended. Well, what about the rest of us? Are you not offending us by disregarding our right to choose? And who are these people who are so easily offended? If someone is offended, then that’s their opinion and of course they are entitled to it. But by allowing this cancerous fear to continue, we run the risk of creating a society that is slave to fringe elements, limiting areas of thought and expression, destroying human mind, creativity and the relationship between man with himself and man with others.

Think about the bigger picture beyond the fad of putting up ‘Je Suis Charlie’ as your profile picture. I am not Charlie but I will protect his right to express whether I agree with it or not – in the same way you have the right to choose whether these are words or mere sounds but more importantly I have the right to say them.

How To Start A Business With Just A Phone Call

Imagine spending days writing a business plan, weeks trying to get money and months developing a website just to find out no one wanted your product from the beginning. Or alternatively you have a great idea but you don’t think you can... Continue →